by wix
It is stated that an element cannot be manipulated above the 350mm height limit and there is a consensus that in the robot mast you can only put sensors/and actuators that are used in the opponent detection (and not for manipulating objects). 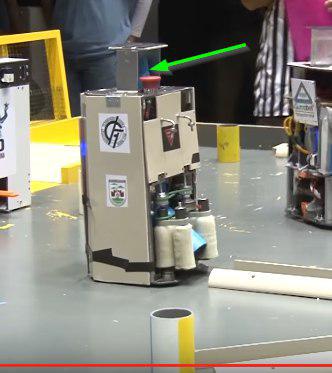 by kid
I'm not an official referee so can't give an official version for this case but a can quote the rules to start to answer your question :

by romain_cvra
How do you expect a team that does not speak French to be on an equal footing with a French speaking team when the official version of the rules is in French?!
In addition, the translation of the regulation into English is at best approximate!

I suggest that for the next few years, the regulations in English be the official rules, as was the case in recent years.
And knowledgeable very fluent or native English speakers proofread the rules.

It's well explained in the english version of the rules that you can't exceed 350mm, even for game elements

by wix
I was pointing 2 rules. I can admit easily that the translation problem may be ignored, but the fact that an object can't go above 350mm is clear !

That said, I'd prefer to have the official version in english too as it would be more "open" to all people. It's seems there is a P.S. vs eurobot ...
All times are UTC+02:00
Page 1 of 1
Powered by phpBB® Forum Software © phpBB Limited
https://www.phpbb.com/